Anyone who has seen today’s Great Barr Observer will have seen the vision of the ‘NEW’ Great Barr Hall. 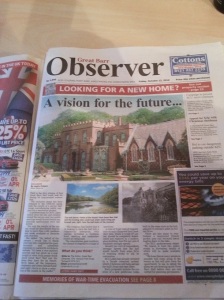 We now know the new company to be running this project is called BCG Lakes and they seem to be proposing a Hotel and conference centre. They will run roadshows in November to present plans and take feedback. Along with this they issued some of the results of the questionnaire. It shows 76% what the Hall to be restored against only 5% for it to be demolished.

The good news is that the full results of the Questionnaire will be released to the residents of Pheasey Park farm.

However in this piece no costings were released. As I posted before I know it cost £4M to restore the Holte Pub at Villa Park (also a Grade 2 listed building) to it’s former glory. these plans are expansive and would be very expensive. I would think approaching £50M plus.

It is only fair we ask the one question that has yet to be addressed.

1) How much will this cost and how will it be funded ?

When we get the answer to this then we can see if the words and pictures live up to the deeds.